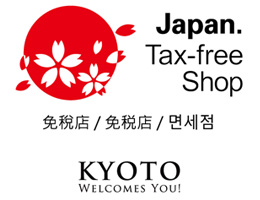 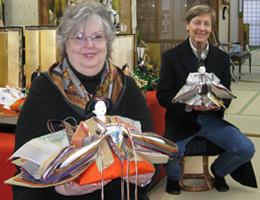 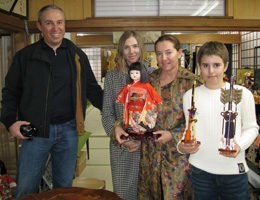 The Hina doll was originally used for the fitting experience, yet as it was extremely time consuming and rather difficult, it is then changed to the fitting of the Ichimatsu doll

The whole fitting experience runs as followed. It will take around 1.5 hours to 2 hours.

The decorated Ichimatsu Doll will be tuned or adjusted by the master; packed to fit the in-flight hand-carry, and delivered to your hotels by the evening of this very day.

We look forward to welcoming you. 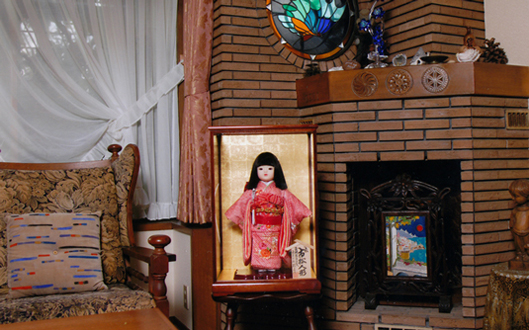 About its Hina doll

Ando’s Hina-doll making is characterized by its rich volume of cloth applied in the making of dolls’ costume. The long sleeve design and the glamorously finished costume create a sense of unity. Dolls’ elegancy is further expressed by the well-balanced triangle formed by their hand position.

The Kyo-Hina doll is particularly charming since its color matching sense expresses a fine blending of traditional colors, which is highly appreciated and loved by the masters of Tea Ceremony, Flower Arrangement and elites or celebrities of noble backgrounds. Our over a hundred year of tradition and style are inherited from our forefathers and are well-maintained. Thus we are able to arrive at the present, to have great influence over famous artisans, and our hand-made dolls are deemed and praised to be the works made by the best Kyo-Hina doll artisans.

In November, 2001, we were awarded as the “Skillful Artisan” by the Minister of Health, Labor and Welfare. In Japan, such award will only go to those with ultimate craft skills and are excellent in their respective fields. In 1964, our predecessor Keiho was awarded with the “Medal with Dark Blue Ribbon”, while in October, 1988 the third generation master acquired the Traditional Artisan qualification and further in May, 2007, he received the “Medal with Yellow Ribbon. From here our position as the “Best Hina-Doll Maker in Japan” is solidified. 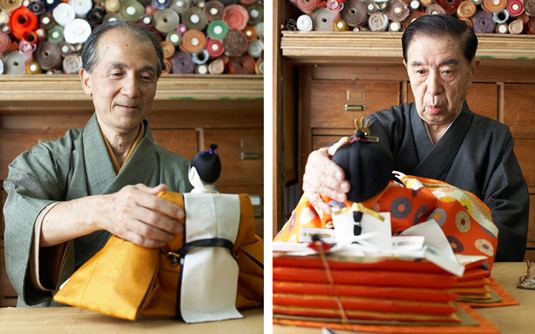 In Japan, the glamorous noble court culture flourished after the Heian period. The Hina doll, the Imperial-Court doll and the Ichimatsu doll together with a variety of different dolls of that time were made by famous artisans. Hina dolls are clothed with traditional costumes (namely the Jyuni (12) Hitoe) derived from different periods of the history. These costumes were made to faithfully reflect the style of each respective time. Hina doll, was highly praised for its ability to convey the Heian style into the contemporary time. Hina doll is also ranked as the top class among all Japanese dolls. Furthermore, the Kyo-Hina doll (literally dolls made in Kyoto) as a special branding is recognized with it high value and quality, made possible by its production process well divided into specializations. Here are some of them:

The head is firstly made by filling the wooden model with cement. Secondly, dissolving the calcium carbonate power in the glue and repeatedly apply this glue on the model (in order to have a glossy finishing of the doll, the shell power is used). Once the surface gets dry, cut out the eyes with knife, draw out the lips with red coloring and line out the eyebrows to finish off. Hair is drawn along the hairline in thin black color. Lastly, polish the wooden model with cotton to achieve the glossy finishing.

Hair is made of raw silk thread. By skillfully applying the hot iron and comb, hair (silk thread) is planted on the head. Glossy, neat and the splendid smooth royal hair is arranged.

Paulownia wood are taken and shaved to form the basic shape of hands and feet. Wires are then put in between finger parts to enable the finger movements. Repeatedly apply the glue with the calcium carbonate power on the surface while the “flesh” part of the finger to be arranged to give the true hand look.

Same material is used for both dolls and gadget making. Traditional colors are applied. The traditional finishing skill is also followed. Gadgets include diadems (coronet), cypress folding fans and swords.

The doll making process is finely divided into different sections. Each section is performed by skillful artisans with unique techniques passed down by their forefathers on the one-to-one basis. Each of them holds sort of national qualifications and titles, takes upon different role and works here in Kyoto. While dressing masters, taking part in the last process of the doll making are called to assemble at Ando shop. As the one to perform the finishing part, dressing masters are carrying out the task of “Real Doll production”. By examining dolls’ faces, heads, and other parts of the body, dressing masters will blend all elements and finely arrange them with the dress (essential the body part of the doll) as the final finish off. The glamorous Nishijin silk brocade and Kyou Yuzen materials are made to order for the making of dolls’ costume. Dressing masters will ponder over on the choices of design, the cutting, tailoring and the way how hands and feet are to be attached. As Kyoto is the place for the high quality Nishijin silk brocade, it is merited to be an ideal place for the “Costumed Doll” production. This is also why many of the fine and elegant dolls are from Kyoto. Among all the Nishijin material, the gold brocade (gold and platinum are blended in the brocade) and the pure silk material are specially weaved and made to use for dolls’ costume. The finished Hina doll is refined thus said to hold the Kyoto-ish elegance. With skillful artisans and top class materials, high-value product is made possible and is without doubt Ando’s own “Special Brand”. 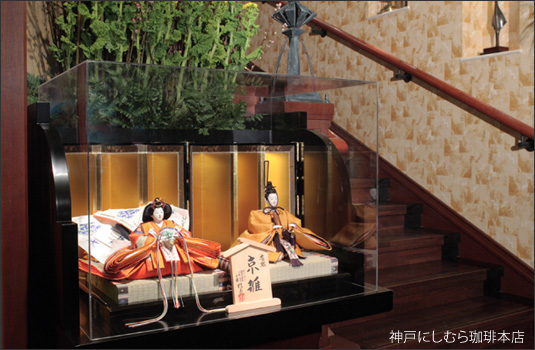 A special gift presented to the King of Thailand-Pamipon

About 13~14 years ago, “One Gift from One Village” campaign was taking place in Thailand. The aim was, for each village to present a gift to the King of Thai for his 80th anniversary. In order to come out with good ideas and strategies, Thai’s vice prime minister, together with some other government officials came to visit me and the shop many times. Once they have seen the Hina doll, they were amazed by its delicacy and the beauty and asked us to make the doll for such a purpose. Despite the fact that the Hina doll making is to follow the traditions passed on from the Heian period, we do have a strong desire to use Thai’s silk and see what the outcome would be like. This was how we have started.

We firstly chose the King’s birthday color-Yellow to make a doll of Queen.  We then took the Japanese fabric such as the Nishijin, Obi cloth, the Tatsumura cloth and the Thai silk and blend them into a splendid piece of material. We could not have been more joyful then to give the birth to this set of the magnificent Hina doll, which was only the one and only set of the world.

Starting with the vice prime minister, some other important government officials from Thai have also came to visit us many time to make sure if this piece of work is worthy enough to be the gift presented to the King. When they learnt that this skill is only practiced by very few artisans since the beginning of Meiji time (as also in the 40~50s, our shop was also supported by few artisans), they were impressed and amazed. They have thus filmed down the whole making process taking place in the traditional Kyoto house (machiya).

Though anyone could have presented this gift, yet, the 3rd generation master couple was honored to be invited by the King of Thai to attend the presenting ceremony on 15th June, 2007, at the Chatorada Palace. We were sitting in the spacious and comfort royal car, and as we approached the main hall of the ceremony, we saw the venue decorated with splendid Thai lotus. The imperial princess Shilindon was also kind to answer all of our questions. She told us that she really liked the doll. The offered Hina doll will become one of the collection items exhibited in the King Pamipon’s treasure room. While the Hina doll is to act as a bridge to connect Thai and Japan, we also pray that through this doll, the prosperity and the happiness to be with the people of Thai. 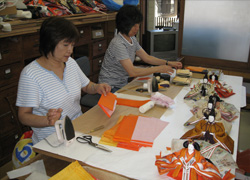 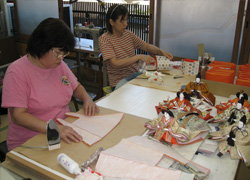 The origin of Hina festival

Since the ancient time, the Japanese have preferred the odd numbers over even ones, while in China it is told that on odd-numbered months and days (such as Jan 1st, Mar 3rd etc) extreme Ying energy (against the Yang energy) generates and brings bad lucks. For this reason, festivals are formed and took place as way of purification.

It is believed that by decorating places with seasonal plants or consuming them is a way of purification. During the Heian period, the purification ceremonies such as the Hina-doll Festival or the Boy’s Day Celebration were held in the palace. The origin of the Hina-doll festival could be dated back to the ancient Chinese ceremony taking place on the 3rd of March (according to the lunar calendar) to wash oneself by the waterfront as a way for self-purification or cleansing from the maliciousness. Paper or straw were made into human form as a substitution to bear one’s sins. This was later widely spread and at an unknown time it was turned into a formal ceremony and is held on the 3rd of Mar each year. It soon passed on to Japan where the paper substitution was also used for the same purpose. These papered human figures were brought to the waterfront and were carried away by rivers or sea as a metaphor to signify the wash away of one’s sins. It was at the time called the papered human figure, which is known today as the Hina doll. 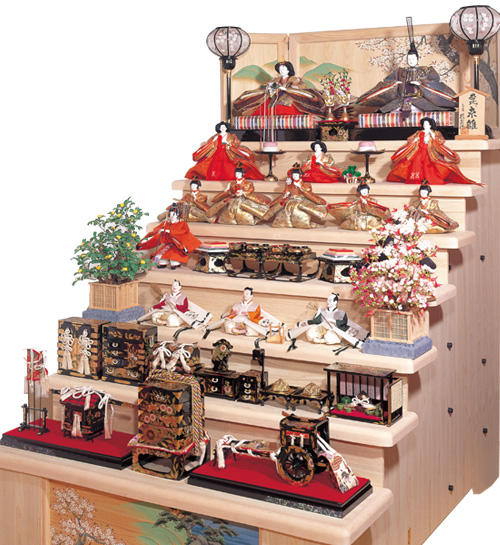 The History of Hina Festival

The words “Hiyina” and “Hiyina Play” were found in the ancient Japanese literature works of “The Tale of Genji” and “Makuranososhi”. While the word “Hina” at the time conveyed the idea of lovely and cuteness, the Hiyina Paly was a play by putting on various gadgets on a pair of doll (both boys and girls). When it came to the Muromachi period, “giving doll as a gift” was turned into a custom as Hiyina Play spared widely, and the “carry away by the river” practice was later became the “doll decoration” custom.

This Hiyina was a standing doll which marked the start of the “standing doll” in Japan. The Edo period was peaceful and tranquil, and as peace reached its peak, such custom was not only practiced among the nobles and the samurai, but also among the merchants. With the holding of Hina Festival, stories in various literary styles were written, and as its popularity grew over the nation, the festival was getting extremely extravagant. During the mid-Edo period, Hina Festival became the first festival for girls, and it soon became a custom for girls to bring their own Hina dolls with them when they got married. After this, the Hina Festival was more than just a festival but a way to pray for girls’ healthy growth and happiness in life. As Kyoto was the birth place of the study of the well-versed usages in practices of the court and the samurai, the “Youshoku Hina” made on the foundation of these practices were also as glamorous and as splendid. “Youshoku Hina” (1751~72), were dolls clothed in noble costume in style of the Kyoto noble families of Yamashina and the Takakura and were regarded a way to preserve and pass on the royal culture. 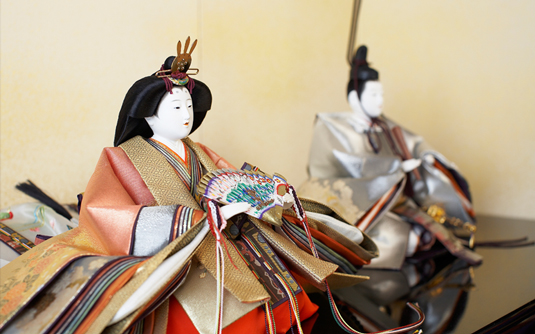 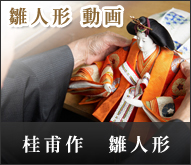 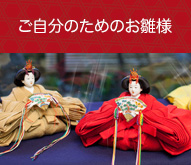 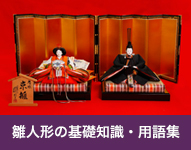